The time has come to stop the war on free speech 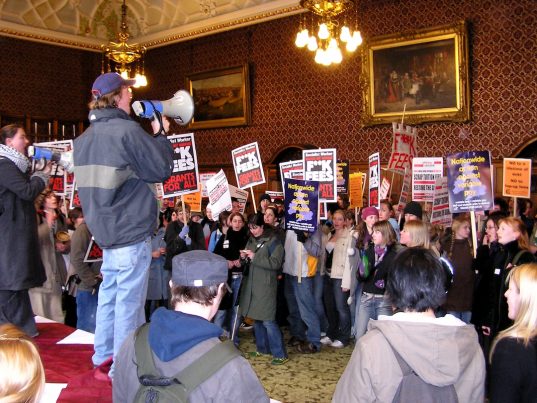 Freedom of Assembly is the first and most important right of the Bill of Rights. Today it is being denied in cities like Berkeley and Portland where local left-wing governments have contrived to deny rally permits while giving the masked thugs of their leftist Antifa allies a blank check to assault those whose views they oppose.

The threat of violence that shut down the Patriot Prayer demonstration in San Francisco, an event scheduled to feature African American, Samoan and Latino speakers, is a case of fascism justifying itself by flying the false flag of “anti-fascism.” And it is the third such case this week – the others being Boston and Berkeley. The founder of Patriot Prayer, Joey Gibson, is a Japanese American who regards himself as a “person of color” and who had made it very clear that he opposes Neo-Nazis and white supremacists, and who has publicly stated that his goal is to promote “love” not hate.

This time the violence and hate were coming from one side, and one side only.

Gibson’s attempt to hold a demonstration to end hate was torpedoed by Nancy Pelosi and Mayor David Lee who falsely claimed that it was a proposed gathering of “white supremacists.” Pelosi insisted that Patriot Prayer should not be allowed a permit for Crissy Field in San Francisco. “The Constitution does not say that a person can yell ‘wolf’ in a crowded theater,” she insisted. But the only people crying wolf were Pelosi and the leftist thugs who caused it to be shut down.

In Berkeley, authorities denied free speech advocates a permit, and did little to prevent the leftist violence that broke out against a handful of individuals who showed up after the organizers had called it off.

James Queally, the crime reporter for the Los Angeles Times, tweeted, “There is a complete mob mentality here. People are randomly accusing random people of being Nazis.” Another Tweet added, “The moderate counter protesters are livid with the violence. ‘We need to get Antifa out of here.’ said man who helped break up fight.’”

The authorities are not going to do it. The choice is simple. Either we have a First Amendment. Or we don’t. If mobs of violent leftists with the complicity of leftist authorities can shut down any protest or speaker they don’t like, then we no longer have a Bill of Rights. All that’s left is leftist tyranny.

In the sixties, Governor Reagan sent in the National Guard to stop the violence at Berkeley. Governor Brown won’t do it. It’s up to President Trump to act.

Mob rule will not be tolerated.

That was the message that President Eisenhower delivered to Americans in the fall of ’57 when he returned to the White House and ordered the deployment of the 101st Airborne to Little Rock, Arkansas.

The Governor of Arkansas, a progressive Democrat who was a product of the radical leftist Commonwealth College, had allowed a racist mob to rampage at Central High School in Little Rock.

Eisenhower warned that “disorderly mobs” operating “under the leadership of demagogic extremists” would not be allowed to terrorize citizens with the complicity of local authorities. He showed that the President of the United States was willing to protect civil rights with armed force.

“The only assurance I can give you is that the Federal Constitution will be upheld by me by every legal means at my command,” Eisenhower vowed.

And that’s what he did.

California, under Democrat rule, has become a rogue state ruled by leftist mobs and their political godfathers, where there are a million regulations, but no rule of law, where there is a code for everything, but where the Constitution no longer operates.

Antifa is a criminal terrorist organization. Its masked thugs know they are criminals which is why they hide their identities. The first responsibility of government is the safety of its citizens.  When violent thugs shut down free assemblies, government is not doing its job.

Reagan and Eisenhower made it clear that mob violence would not be tolerated. And they were willing to back up the Constitution and our political freedoms with force.

That’s what must be done to restore First Amendment rights in Berkeley everywhere Antifa mobs seek to shut down the free speech of those they disagree with. If leftist governors and mayors won’t protect the rights and safety of their citizens, then it’s up to the federal government to step in and do it for them.