Factions within the U.S. are attempting to normalize political violence and make the country ungovernable 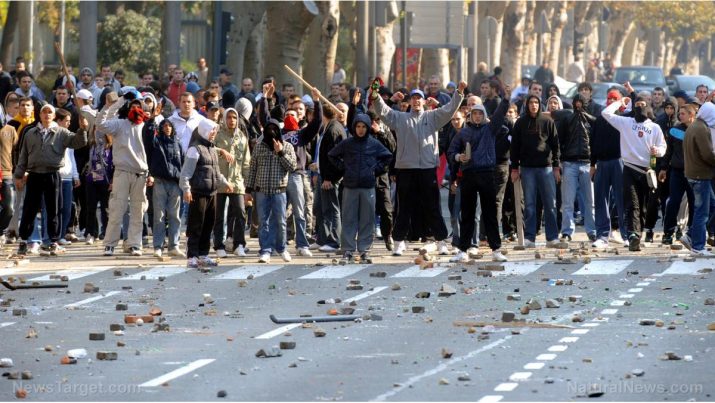 As Monday evening approached, thousands of Alt-Left supporters and anti-free speech terrorists gathered in Phoenix to protest a political rally held by President Donald J. Trump in what is becoming a common reaction by his opponents.

Before I go any further I want to clarify something: I’m a constitutionalist and fervently believe that every American ought to be able to speak his or her mind freely, even if I find their speech nauseating and shockingly out-of-touch.What’s more, I have served in my country’s military overseas to protect and defend our Constitution and all the rights it recognizes and guarantees.

But when I see people gathering specifically to oppose a free speech event using violence to intimidate fellow Americans into silence, that angers me. You don’t have to like or support Donald Trump or his supporters; you do have to let them have their say, and without threatening them with physical harm.

Because if you don’t, then not only is our Constitution in danger of becoming irrelevant, our country is in danger of spiraling into civil unrest and outright war.

When we can’t have polite, unimpeded, political dissension — one of the cornerstones of the First Amendment — then America will descend into the same kind of destructive chaos hundreds of nations before us have descended into, never to recover.

If you actually want that, I’ve got some harsh truth for you: You’re part of the problem.

Conservatives and right-leaning Americans are not ashamed of standing up for their beliefs. What we’re not used to doing is using violence to shut down the speech of those who disagree with us.

Left-wing political movements, on the other hand, have always used violence as a means of enforcing their viewpoints and stamping out the voices of those who disagreed. In Nazi Germany, the Brown Shirts sought out and committed violence against Communist voices that opposed Hitler’s rise; today, it’s groups like Antifa, Black Lives Matter and the “Occupy” movement who are using the tactics of the Brown Shirts.

Yes, there are Alt-Right movements that are violent, as we saw in Charlottesville recently. I’m not condoning those groups, either, nor their point of view — only their constitutional right to have them and to speak them. I don’t have to agree with neo-Nazis and white supremacists; but under our system, I do have to let them speak.

Leftists don’t think like that. They believe that because they oppose a political point of view or because they have branded someone a “fascist” or “racist” or “bigot” those people are suddenly no longer Americans who have a constitutional right to free speech and assembly. Leftists believe they have some inherent right to beat or even kill someone who espouses a different point of view or one that offends them.

They don’t. No American has a right to attack another for their views.

And yet, it’s the Left that is attempting to normalize political violence and terrorism these days. They seek to impose their own points of view at the end of a club, or with bags of urine and feces. If you don’t agree with their narrow, extremist points of view, then you are branded a [fill in the blank], delegitimized, dehumanized, and denied your constitutional rights. (Related: There is a storm of civil unrest coming and you need to be fit to fight … Here’s how to prepare.)

The Left’s political opponents don’t have to actually be racists, bigots, and homophobes, mind you. Trump, for example, has never uttered a racist, bigoted thing. But because he holds certain views on immigration and national security, he’s been branded a “racist bigot” by far-Left sycophants who just disagree with his political and policy views.

So they react — with violence — and then attempt to justify their violence as somehow being ‘patriotic’ and ‘democratic’ responses to ‘facism’ and ‘oppression.’

This is making a growing faction of Americans ungovernable, and to them, that’s actually a goal.

This won’t end well, because similar social unrest has not ended well anywhere in the world, throughout history, when the Alt-Left has begun to normalize violence in the name of furthering its own selfish political objectives.