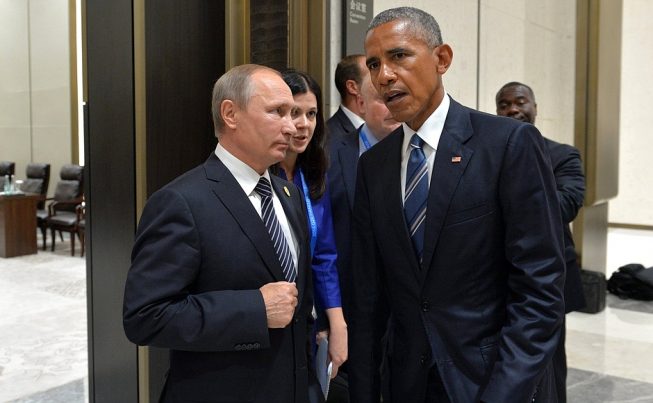 Since Nov. 9, the day after the presidential election, Americans have been treated to the lie that Donald J. Trump and his campaign (and later, inner political circle) “colluded” with Russia to “steal” the White House from Hillary Clinton.

There have been a number of variations on this phony narrative — Russia mass-planted fake news in hundreds of websites, Facebook and Google; Russia “hacked” the election to change ballots; Trump and Russian President Vladimir Putin are BFF’s who set all this up before Trump announced he would seek the GOP nomination; yada, yada, yada.

Mind you, none of this has been proven. After nearly eight months of allegations and innuendo, mostly in the form of Deep State leaks to willing Left-wing accomplices in the Democrat-controlled establishment media, not one shred of evidence has surfaced to indicate any part of these hyped narratives are true.

In fact, the FBI and other intelligence agencies have been looking into Team Trump-Russia ties for nearly a year. And still there is nothing.

So what’s the deal? Why are these investigations continuing? Why hasn’t the Republican-controlled Congress put a stop to this nonsense? Why is the Justice Department wasting taxpayer funds with a special counsel and staff?

On recent episode of his Fox News program, “Tucker Carlson Tonight,” the namesake opened his show emphasizing that after all the hoopla, leaks and charges, the “Trump-Russia” narrative is a massive nothing burger aimed at bringing down a duly-elected president.

[H]ere is what is true – as of 8 p.m. Eastern time tonight [June 9], Donald Trump is still the president of the U.S., and that means on the most basic level, [fired FBI Director Jame’s] Comey’s testimony [before the Senate Intelligence Committee] failed to achieve its goal. Make no mistake, removing Trump from office was the goal. “There was collusion, Russia hacked our election, assault to our democracy, imperils our way of life!” You hear those all the time. You hear them every night on this show but nobody in D.C. actually believes any of that, and that’s why nobody ever explains how exactly it happened or what specifically the effects of it were. Because they have no idea. And in fact, they don’t really care. They just want Trump gone along with anyone who is in the way. Russia is just a means.

There have been various other targets within the Trump White House as well — advisor Steve Bannon, Attorney General Jeff Sessions, son-in-law Jared Kushner, former National Security Advisor Michael Flynn, spokesman Sean Spicer, chief of staff Reince Priebus, advisor Kellyanne Conway — but getting to them, too, is a way to eventually get to Trump. (RELATED: Dershowitz warns that left-wing media frenzy endangers civil liberties by promoting LIES about Trump and the presidency)

All in an effort to do nothing more than topple “a democratically elected government” that ‘official’ Washington despises (that includes establishment Democrats and Republicans, by the way).

“[A]gain, this is not about truth or fairness, much less protecting this country from foreign threats,” he added. “It’s about toppling – let’s not lie about it – a democratically elected government that the permanent class in Washington does not like.

“Now again, collusion with a foreign government against the interest of the United States is tantamount to treason,” Carlson continued. “It is definitely a moral crime, and we would never defend it. We would attack it, of course. There is just no evidence it actually happened. This whole story is a hoax. It’s a lie that those who tell it they tell it are beginning to believe. That is the definition of mass hysteria. It is deeply hurting our country, and yet otherwise smart people press forward as if it is all entirely real despite mounting evidence it is not real at all.”

And now that a special counsel, Robert Mueller, has been appointed, many long-time Beltway politicos believe that he won’t get out of town without indicting, charging or implicating somebody in wrong-doing.

Most of those same people believe, once more, that the ultimate goal is Trump removal.