VIOLENT LUNATICS: Punching Steve Bannon will now get you FREE whiskey for life at Portland bar 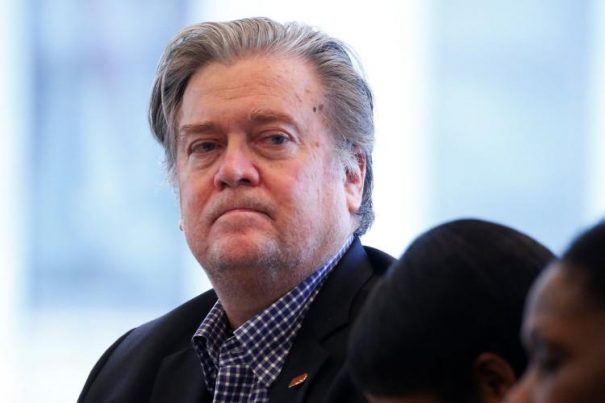 For all this talk about “self-identifying,” the left wing sure is bad at it. When a liberal looks at him or herself in the mirror, they see a kind, compassionate and tolerant individual staring back at them. As such, they take great pride in telling the entire country how loving they are, and lecture the rest of us on how we should act the same way. But this flattering image that the left has created for itself is nothing but smoke and mirrors. In reality, and politically speaking, many liberals are nasty, vile human beings whose hatred for the conservative movement diminishes any hope for civil and rational debate. At times they even incite violence, channeling the radical revolutionaries of decades past and taking to the streets in the name of social justice, economic equality, and most importantly, destabilizing the country and the conservative movement (RELATED: Anti-Trump protests escalate as BLM affiliated school teacher encourages violence).

Here is a perfect example: A whiskey bar in Portland, Oregon is now offering customers free whiskey for life if they can successfully punch White House Chief Strategist Steve Bannon in the face. The bar, called Paydirt, is printing the offer on the bottom of their receipts.

At first glance, you may be inclined to conclude that the Paydirt isn’t literally encouraging their customers to go out, track down Steve Bannon and punch him in the face. You may think that surely, they are referring to a cardboard cutout of Bannon, or some kind of a blow-up doll. Sadly, this is not the case. Paydirt is actually rewarding people who incite real, physical violence.

There are a number of well-known restaurants and department stores that have publicly expressed their support for conservative values, including Chick-Fil-A, Hobby Lobby, Walmart, Carl’s Jr., and Papa John’s. Could you imagine if any of these institutions dared to offer such a promotion to their customers? What if Chick-Fil-A, which came under fire a few years ago for supporting traditional marriage, were to tell their customers that they could get free chicken sandwiches for life if they go out and punch Joe Biden in the face? It’s not hard to imagine what the outcome would be – the liberal media would be reporting on it for weeks and left wing activists would be relentlessly trying to get them to close their doors for good. But of course, because the violence is being directed towards a republican as opposed to one of their own, conveniently the story stays under the radar.

Unsurprisingly, Paydirt has a reputation for contributing to the progressive movement and burying their customers in left wing propaganda. For instance, Paydirt donated a portion of their profits on Inauguration Day to Planned Parenthood, an event that they even advertised for on Twitter: “Inauguration Day is not going to be easy. We’ll be donating a portion of ALL sales this Friday to Planned Parenthood. Come drink with us.”

A couple of months prior, on election night, Paydirt offered a free champagne toast to the “future Madame president.” How sad that the rest of the night didn’t exactly go how they wanted it to.

As if this wasn’t enough Hillary Clinton butt kissing, the bar offers a special cocktail that they named the “Chillary Clinton,” which is made with Bombay Sapphire, St. Germain, blackberry muir, lemon and sugar.

And of course, no left wing bar would be complete without a plethora of anti-Trump imagery used frequently in advertisements. Paydirt has even featured a Trump piñata so that customers can take a break from their drink every once in a while to beat the president of the United States with a bat.