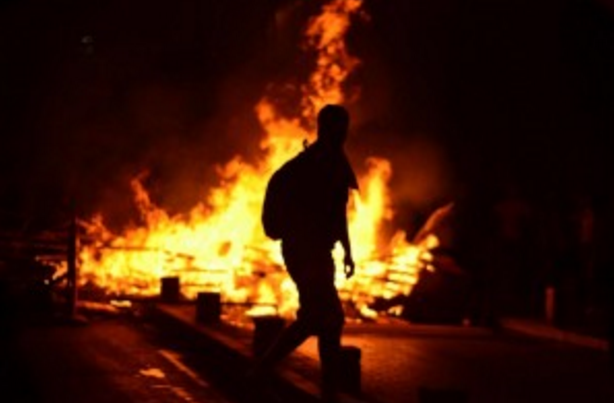 (Bugout.news) As you may know, over the weekend there was another police shooting of a suspect who was killed by a police officer after refusing to put down a gun he wasn’t supposed to have in the first place.

As of this writing the names of those involved – neither the police officer, 24, or the suspect, 23 – have been released. Those will be forthcoming but suffice to say, because of what happened next, it’s a safe bet that the dead suspect was African-American.

Why? Because the incident was followed by rioting instigated largely by blacks who professed allegiance to the Black Lives Matter movement and who were targeting white people to attack.

In various mainstream media reports covering the riots, details were included such as the burning down of a gas station and an auto parts store, the smashing of police cars and the chasing of reporters by the mob.

However, as usual, there was nothing said about the specific targeting of white people by blacks, though interestingly enough one outlet – InfoWars – managed to acquire several videos capturing black people egging each other on to attack white residents.

“They beatin’ up every white person,” one rioter can be heard saying in one of the videos. “They white, get their a**,” says another.

Yet another clip shows a black man attempting to justify the rioting because rich people don’t give blacks enough money. Never mind that “the rich” already pay most-to-all of the income tax the government collects annually – and then summarily spends on entitlement programs aimed, in large part, to assist minorities.

So, why the violence? Why this hatred of all people white? Is it really a “police thing,” and if so, what happens when black officers are either gunned down by racist haters or are otherwise involved in these “injustices” against other blacks? At what point does the black community, which wants to segregate itself from everyone else according to the official BLM website (“love Black, live Black and buy Black”), accept responsibility for its own problems – disproportionate levels of violent crime; young men unwilling to take responsibility for their children; government dependency?

Are whites really responsible for the problems within the black community? Or is BLM-inspired violence against white people really more about revenge for perceived griefs that are no longer in existence but are being treated as though they are by professional rabble rousers like Barack Obama, Loretta Lynch, Al Sharpton and Jesse Jackson?

These people are not “healers,” they are enablers – by providing young blacks with excuses for not succeeding and not pulling themselves out of endless cycles of poverty and violence. And they are enabled by a sycophantic mainstream media that refuses to report and highlight the very obvious, very documentable problems within the black community. No, it’s always someone else’s fault.

The only difference between Black Lives Matter thugs of today and the Ku Klux Klan thugs of yesteryear is that progressives refuse to identify them in a similar manner. Where’s the Southern Poverty Law Center? Where is the ACLU? President Obama? The Justice Department? Because if some white group were burning cities and singling out blacks for beatings, the full weight of the government would be brought to bear. Especially the present administration.

Which brings us to this point: Don’t expect Washington and the political elite to help us out on this one. Half of them want this kind of thing to be happening because it empowers them even further; the other half is too frightened of being called a name to speak out and call this what it is: Domestic terrorism with a definitive racist bent.

Our cities are under siege. The civil society is literally at risk of collapsing into open racial warfare – something nobody should want. But it’s all happening on purpose. The divide is being stoked. The die is cast. And no one is going to be able to stop what’s coming.

The most powerful nation in the history of the planet is destroying itself from within. When the crash does come, it will truly be heard around the world.

And guess who will be waiting in the wings to ‘take charge?’ It won’t be a constitutionalist, that’s for sure.